Over the last twenty years, the United States military has studied the potential value of caffeine as a tool for increasing the endurance and performance of soldiers in the field.  A great deal of this research was conducted by Dr. Harris R. Lieberman, USARIEM, of the Military Nutrition Division and Tufts University.  (Dr. Lieberman praised our book The Caffeine Advantage by saying that “the authors do an exceptional job of synthesizing extremely diverse research to reach important, novel, and practical conclusions.”)  Under Dr. Lieberman’s guidance, the military even published a entire book extolling the benefits of caffeine for combatting fatigue, sustaining alertness, and increasing survival chances while on duty.  In order to make the advantages of caffeine available at all times, the army actually developed a chewing gum which offered benefits in terms of portability and convenience.  The gum, issued in Special Ops Rations, delivers 100 milligrams of caffeine per piece or a little more than half of the caffeine in a cup of  filter drip coffee.  Now, this gum is available to you!  It’s called “STAY ALERT Military Caffeine Energy Gum” and you can check it out on Amazon.  (This gum is also available in a cinnamon flavor.) 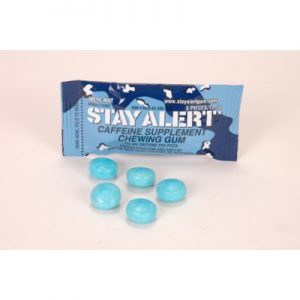 If you want a portable source of caffeine that contains only a small amount of caffeine, you might want to try Penguin Caffeinated Mints.  The mints are tasty, and each mint delivers only 7 milligrams of caffeine, so this product is suitable for people who want to limit the caffeine they take.