Like many other benign drugs, caffeine does cause a metabolic dependence.  That means that, if you are using substantial amounts regularly, you may experience some discomfort if you stop using it suddenly.  However, a metabolic dependence and an addiction are not the same thing!  As we’ve explained in other posts, physicians and addiction scientists have made it abundantly clear that an addictive drug is a drug is a drug that a person is powerless to stop using despite the fact that the drug is causing serious problems in the person’s life.  However, it is obvious that no one ever lost his job, his house, or his wife because he couldn’t stop using caffeine.  So, caffeine is not properly described as “addictive.”
This fact hasn’t stopped some questionable merchants from creating and selling Caffeine Addiction Hypnosis CD: Overcome Your Addiction to Coffee and Caffeinated Drinks with Self Help Hypnosis. 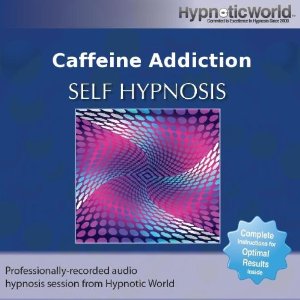 The scare-mongers who are selling this CD state that, “Caffeine is a highly addictive drug with many side effects including heart palpitations, constant fatigue, irritability and even stomach ulcers.  Think of the color of the inside of your teapot at the end of the day – then imagine your stomach after twenty years of tea or coffee drinking.”
As we’ve made clear, these concerns about caffeine are all figmentary.  And, in any case, if you want to stop using caffeine, it’s very easy to simply taper off the dose you are using over a period of a few days, thus avoiding most or all of the slight discomforts that abruptly stopping the use of caffeine might cause.