The Disparate Cultures of Coffee and Tea

Coffee and tea have given rise to two great, largely divergent streams in the cultural history of caffeine.  Coffee has become associated with the artist, the non-conformist or political dissident, the bohemian, even the hobo, its use often considered a vice, its consumption linked with frenetic physical and mental activity, intense conversation, and with other indulgences that threaten health, such as tobacco and alcohol.  Tea, in contrast, has been associated with the drawing-room, quiet social interaction, spirituality, and tranquillity, and is regarded as the drink of the‚elite, the meditative, the temperate, and the elderly.  These differences are easily seen by comparing the decorous traditions of the English afternoon tea and the Japanese tea ceremony with the ancient, worldwide, socially inclusive, and rough and ready institution of the coffee house.  These same differences must underlie the fact that although coffee has been the subject of many bans by sultans, kings, chiefs of police, and religious leaders and opposed by many temperance movements, tea has rarely, if ever, appeared on anyone’s list as a substance that ought to be put beyond the pale of law or morality.
The more you think about it, the more paradoxical this duality within the culture of caffeine appears.  After all, both coffee and tea are aromatic infusions of vegetable matter, served hot or cold in similar quantities, both are often mixed with cream or sugar, both are universally available in virtually any grocery or restaurant in civilized society, and both contain the identical psychoactive alkaloid stimulant, caffeine.  It is true that coffee is generally brewed to a caffeine strength over twice that of a typical cup of tea, yet, because more than one cup of each beverage is commonly consumed, there is no doubt that you can get a full dose of caffeine from either one.
So the question remains:  Why has the duality between the culture of coffee and the culture of tea become so universally and so sharply delineated?  For example, why did tea become the center of a decorous, conventionalized, intimate social gathering in both England and Japan, while coffee failed to do so anywhere?  And again, why did coffee become the convivial center of gossip, business, and political and intellectual banter in medieval Turkey, in London in the 17th century, and in dozens of American cities in the mid ’90’s, while tea failed to do so? 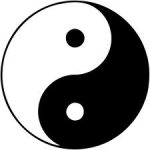